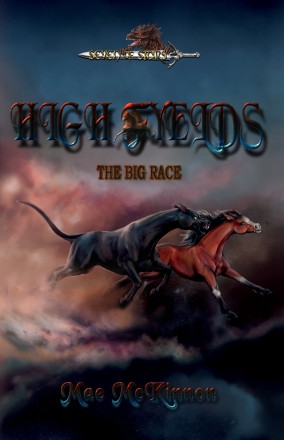 If anyone had told Erina a few years ago that she’d be entering one of the most prestigious horse races in the world; the Phoenix Stakes, she would have called them mad.

Since then she’d discovered a Valley that didn’t exist on any map ever drawn; been adopted by a highly peculiar horse; and learnt that magic was real.

In comparison, a small race should have been easy, surely – even if she did have to fly half-way across the world to take part.

Admittedly, she hadn’t counted on the nightmares wanting a piece of the action and they’re really keen on taking a bite out of the competition this year.

Along with the mysterious Seranthiem, Erina and Harlan from High Fyelds must now face their second challenge.

or most other Amazon sites

She crept forwards, light on her feet, until she reached the edge of the open arena. Peering into it, she wondered what she’d see.

There should have been applause.

There should have been an audience.

At this hour in the morning, the indoor arena was deserted by all but a few barn swallows that had taken up residence in the rafters. Well, almost. There was what had attracted her in the first place: the low, solitary thuds of a horse in motion over soft ground.

‘Fascinating,’ she breathed. She’d been right. There was someone here. ‘Working, even at this hour? That’s some dedication.’

The mist wasn’t visible in here, but it still took time for her eyes to adjust to the gloom as none of the overhead lighting was actually lit, and, as such, she heard the two approach long before she could actually see them.

The ‘thud’ ‘thud’ ‘thud’ of the hooves on the sandy ground was the first. Then came the creaking of the harness — what little there was — and the jingle of the metal. The hot breath of the horse in the chilly air of the morning. It had all come closer and closer.

All those sounds formed a picture of their own in the mind of anyone “watching” and you were already expecting something coming — floating — towards you out of the half-shadows even before they did.

Approaching out of the gloom, a small arablike mare trotted.

It wasn’t even right to call it trotting. It was more than that, far more. She moved as if she was dancing on the very edge of the air itself. Through the collected, gliding motions, you could positively “feel” the pent-up energy and power being released into every step — like a dam with all its spinners and turbines working, humming with quiet but stifled efficiency, merely hinting of what lay behind.

The majestic figure had come closer and closer.

It had been a chance thing. You know, the kind where you just happen to take a different road home and suddenly a whole new experience just opens up in front of you; one that was there all the time but which you had, nonetheless, never seen before.

They’d almost seemed to move in time with the small ripples on the lake beside the arena that gently caressed the sand lining its carefully sculptured shoreline. Morning, as it was finally breaking through the sun mist, was colouring them blue and gold as the sun rose quietly into the sky — still veiled by a thin film of clouds set aglow by the light.

Since it was still early spring, the light “looked” warm, but once you stepped out into it, if you didn’t wear enough, it had a chilly edge. Much like the sand by the lake’s shore, it looked inviting at a glance but below lay a wet, moist filling that sucked at your soles.

But these two moved with an almost unnatural grace, horse and rider: Creatures of light and air and fairytales.

is set during the Sixth Age of the Seven Stars Universe . This is an Age of exploration and discovery – where science opens its eyes to the new dawn of as Magic wakes from its eon long slumber. Lost Valleys. Spaceships. Techno marvels. Mysterious Strangers. This Age has it all.

Check out our dragon based bookgauge

This book began life with the help of some awesome backers on Kickstarter. Thank You!

Where the adventure begins

LOGIC WILL GET YOU FROM A TO B. IMAGINATION WILL TAKE YOU EVERYWHERE